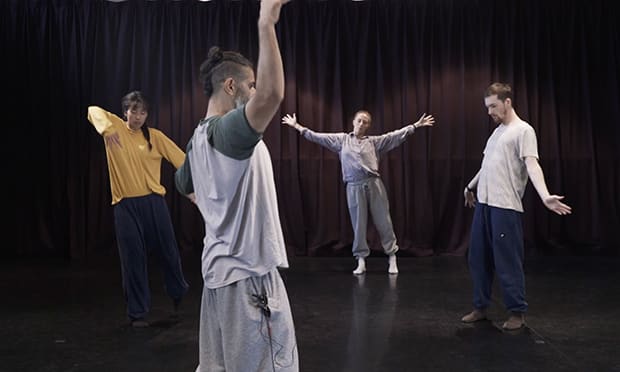 Double Murder is two pieces dissimilar in almost every way, split down the middle, right and left side of the brain, yin and yang, Sonny and Cher – you get the point.

First is 2016’s Clowns, filled with – you’ve guessed it – clowns (is anything scarier?). They are more Vivienne Westwood than kid’s party, with a sinister It sense thrown in.

The focus is on the circus of cruelty, the shallowness of entertainment, and the brutality of modern life. Yay! This is murder with a capital ‘M’ and although Shechter’s choreography is uncompromising, and the dancers’ energy unflinching, the theme is rather battered to death before us.

Mixing macabre, simulated violence with almost imbecilic playfulness creates a hellscape of repetitive action and physical trauma. The group work is tight and interlaced with cruel humour, and solos are largely avoided, with small sections of singular dancers occasionally breaking out from the group only to be reabsorbed.

It is undoubtedly refreshing to move away from the fluffy, cheery escapism of a lot of lockdown-based work, but hold onto your hats, we haven’t hit the second act yet.

Reworking Clowns brings a hopelessness that is uncomfortable but maybe needed in our current geopolitical space?

The Fix on the other hand was birthed in a rural Italian village during lockdown. Dressed in 80s mom-jeans and shirts, what follows is a celebration of human intimacy, healing, and recovery.

Clowns seems to have too much of a tunnel vision on one theme, and The Fix feels too open-ended. Although peppered with lovely moments, it falls into the slush of sentimentalism. Couples waltzing slowly to a mimed campfire guitar song is touching, but the constant clawing hugs drown the piece somewhat.

Maybe our minds are too flavoured by the demonic cruelty of Clowns and are therefore blinded to the sweet naivety of the second act?

Throughout, the dancers put their all into each heavily stylised movement, and beautiful moments are crafted by their bodies and the mind of Shechter. He is a gifted choreographer, creating soundscapes that blend snippets of classical and vocal work with industrial thumping.

Visually, Tom Visser and Lee Curran’s lighting changes the space imaginatively (the things you can do with a string of fairy lights and a spotlight), and Peter Todd’s costumes cling to the dancers’ lithe bodies like gloves.

The company moves like a well-tuned machine, spinning and flailing in unison – this is dance at its technical high point. Yet there is an undeniable sense of smugness. Clowns playfully extends the already elongated clapping of the audience into a rather self-congratulatory joke, and The Fix ends with masked dancers hugging members of the audience.

Critics are known for their shrivelled raisin hearts, but the lack of subtlety, wildly lurching from one extreme to the other, creates an uneven result that all the skill in the world cannot temper.