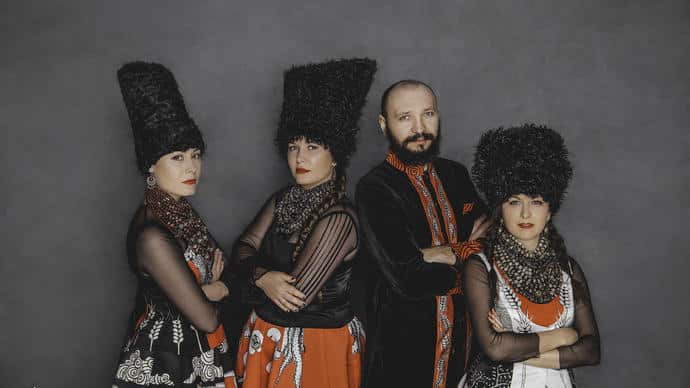 As (seemingly) the whole of London’s Ukrainian population squeeze In the Barbican Hall I find myself pleasantly astonished. DakhaBrakha may technically be a folk group and wear traditionally Ukrainian costume but there’s nothing old-fashioned or conservative about what I’m about to witness.

Theatricality has never left the band, as they stride onto the stage in heavily embroidered costumes, black and white, with the signature kovpak hats rising above the woman’s heads. Halanevych bald head glints, pointing out of his black cape, backlighted by the kaleidoscopic projection work that accompanies all of the songs.

Musically the whole experience is a riotous explosion of infusion, colour and reinvention. The classic Eastern European folk base is there, harsh belting and complex hypnotic harmonies. Layered over this is Halanevych’s eerie falsetto and the almost uncountable musical instruments that appear in the performer’s hands/mouths. Garentska’s cello brings an almost rocky kick to the proceedings, and mouth-harps make links to the Indigenous Australian style art on the screen behind them.

People actually get up and dance… in the Barbican, a sight both rare and beautiful. The band holds us in their hands, not due to what they say in-between songs (as this is minimal) but with the frenetic blend of musical styles and pounding energy. In one section the audience is asked for “our hearts and hands” as we clap out a beat for the song.

Despite a mainly Ukrainian set a song in middle English, Shakespeare’s Sonnet 77 fit surprisingly well into the group’s ever-morphing style. This “absolutely English song” is another triumph and a clever nod to the current setting. The lighting states infuse each song with such a wash of feeling, as the group dive into another piece a red tones mixes with an animation of the knights Templar behind them, providing and storm religious feel. Yet another moment we are challenged by the group’s introduction “from a free Ukraine” reminding us that they are anything but just pretty sounds, there is real thought and intellect here. This can be partly down to creator Vladyslav Troitskyi’s clear vision and direction.

Having arrived with no preconceptions and a vague idea of pleasing harmonies and sad songs about lost loves I was utterly entranced. I urge you to download their albums, book their concerts and fall deeply in love (as I did) with this most unique concept . Weird, wonderful, and totally themselves, can Mumford and Son’s say the same?