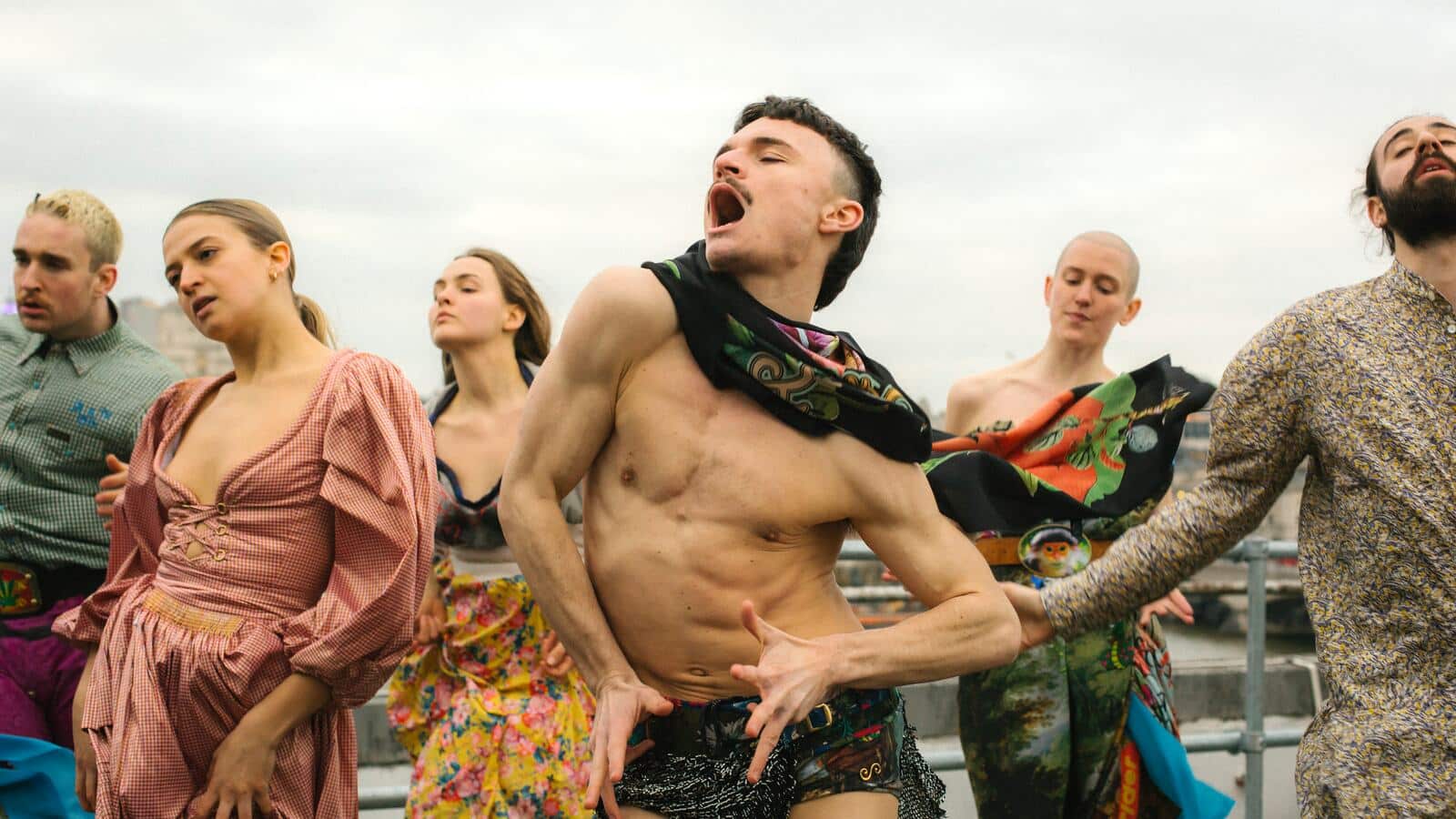 Can a show that blends the different skills of a famous choreographer, composer and fashion designer work? In this production, the crème de la crème of their respective fields, Holly Blakey, Mica Levi and Andreas Kronthaler (for Vivienne Westwood), collaborate, the question is will it create a masterpiece or a hot mess?

This is what I wanted to be answered when I sat down in the beautifully revamped Queen Elizabeth Hall at the Southbank Centre, surrounded by an intimidatingly well-dressed audience and the British fashion designer herself. With some reservations, the show delivers a wonderful answer. Cowpuncher is an aesthetically stunning experimental dance piece with a score by Levi that swells emotions like the sea. With a playful and tongue in cheek reimagining of the wild west, we see dancers clad in iconic Westwood style costumes perform in a show so sleek, emotive and raw that it takes your breath away. Plenty of hair thrashing is involved with a choreography that at times veers towards the overstated but ultimately is exciting to behold. The dancer’s bodies undulate, and toy with the hyper masculinity of westerns, creating a piece that is as physically arresting as it is visually stunning.

This non-narrative attack on the idea of the west as both a fashion, cultural and physical idea, feels languid and although the title names bring their signature flare to the show, the music is the real shining star. Levi’s experimental soundscapes craft this dusty, sexy and aggressive world with such imagination and skill, that I instantly downloaded all her work onto my phone as we left the theatre. The shows fetishizing of the cowboy and its ironic twisting of what that means with costume, movement and sound, holds the audience under its spell and with a red wash and bare stage, the mixing of these Monmouth creators is unravelled before us with real power.

The experimental choreography by Blakey is both tender and brutal and with a frantic urgency that is palpable at times. There are moments of a punk subversion of gender roles and the violence that is shown disturbingly yet beautifully encapsulates the savage world of the cowboy. One of the strongest moments for me is the slow and precise beginning section, when washed in a desert red, the dancers in a clump build the tension expertly with a simple stylised lasso movement. The group work is wonderful and the changing of intensity and attention to detail in this section really sets the tone for the whole show which overall is brimming (almost to the point of overflowing) with incredible craft from all the contributors.

Saying this, there are points where the choreography feels a tad sloppy and is by far the weaker element out of the three. This is a very specific show and would not be everyone’s cup of tea (or is this case Jack Daniels). The show is incredibly chaotic and although the chaos is part of the charm, sometimes I felt a little overwhelmed by the mixing of the prestigious talents involved. The intensity plateaus at points, especially with the solo performances, and the focus on the masculine notions of the Wild West at times feel a tad forced. The music is flawless and really makes me love the show, but with the costumes being a statement in themselves, and the choreography sometimes falling behind, the three approaches creatively don’t always work together in harmony.

This show is joy to watch nevertheless and opens up a very interesting discussion on our creation of the idea of the wild Wild West. It subverts, challenges and at times screams this discordant conflicting message at the audience and although it can seem disjointed, maybe that feeling of being lost is part of the experience? I urge anyone to jump and see this show if it is ever put on again, and like me, enjoy getting lost in the wealth of ideas pouring forth, Cowpuncher has landed and it will not go quietly into the night.