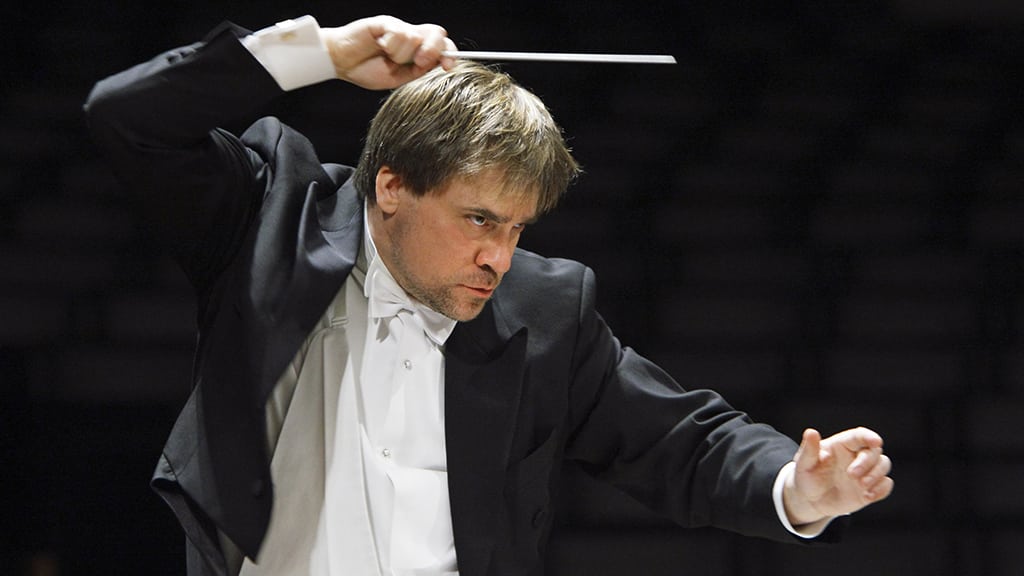 An evening of Russian classical music and patriotism sounds like a tough sell currently. But despite the raging argument of cultural-canceling the Barbican and BBC Symphony Orchestra’s clever selection and curation prove to be a thought-provoking event.

Framing the work and more specifically Symphony No 5 in D minor of Dmitry Shostakovich alongside one of his forming influences Modest Mussorgsky. Also charting his influence on more modern composers such as Sofia Gubaidulina.

With Mussorgsky living under the restrictive rule of tsar Alexander III. Sofia Gubaidulina composing through the cultural relaxing know as the Khrushchev ‘Thaw’, Shostakovich 5th Symphony was written under a particularly suffocating political cloud. As Joseph Stalin’s “Great Terror” spread through the ranks of Russian society in 1937 Shostakovich’s patron general Mikhail Tukhachevsky was arrested. After Stalin’s displeasure at his Opera of The Lady Macbeth of Mtsensk District, everything rode on his next symphony to literally save the composer’s life. Pulling a fast one Shostakovich did the unthinkable, wrapping a subtle protest in proclaiming propaganda. Politics and art; uncomfortable bedfellows.

As we settle into the hall a mournful solo flute tunes up. A small swarm of gnat-like mics hover from the ceiling to broadcast the performance on BBC radio 2, better not sneeze then! The cacophonous discordant tuning shapes of the BBC SO begin. John Storgårds marches on in a morning coat and white waistcoat replacing Eva Ollikainen (due to an injury), and off we go.

Starting with Gubaidulina’s Fairy-Ttale Poem. This piece begins with long Lagarto notes from the strings, wide and menacing, then sloping into a sea of light mutterings. Plucking creates a tense exploration, part traveller lost in the forest, part spy soundtrack (fitting considering the cold war setting). Utilising the giant harp stage left to pick moments of delicate focus in the silent gaps. 15 minutes of intensity, jumpy, jittery, and just great. This piece, written in 1971 is a perfect example of how political change in the USSR allowed for Gubaidulina (and others) to experiment with more avant-garde techniques, with outstanding results.

Next is Shostakovich’s guiding light; his own orchestration of Mussorgsky Songs and Dances of Death. Being possibly the most goth piece of classical music I’ve ever heard, on strides Kostas Smoriginas our bass-baritone and death personification. Through four poems we hear in soft Russian death woo various humans. A young child is “saved” from hunger, a woman is overpowered, a drunk is claimed in a blizzard and finally, death gleefully dances through a battlefield. Smoriginas in deep black jerkin and hair scraped back in a man bun opens his arms wide, every inch the magnanimous god of mortality. His voice is like a cedarwood, impossibly deep and dim, clashing and cajoling in death’s various disguises. The horns cry, Smoriginas bellows his thundering crescendo, and the swagging triumphs of the grim reaper leave an impressive if not particularly cheery imprint. Mussorgsky’s dark irony and final statement claiming that death is the only winner of armed conflict feels painful topical. The repeated “Bajushki, baju, baju”(Hushaby, hushaby-hush) is both soothing and bone-chilling.

After the interval, the piece everyone has come to see grips us and does not let go! The first movement announces itself from the rooftops, descending scales from the strings giving us a bolshy blast. Like a rushing river building speed, meandering past rocks and debris. There is serenity here but with an edge of paranoia, as we ascend inexorably towards a crashing conclusion. Visible physical appreciation from the normally polite classical audience is charming. Toes tap, heads bob and smiles crinkle all around us.

The second movement’s thumping cello starts bringing us into another linked but completely different world; biting, nippy and choppy, like dancing couples throwing one another around the floor, swinging petticoats, and straining toes. Frantic peddling of nationalist idealism at ironic speed.

The third movement seems to have lost something, freedom perhaps? More wistful, yet touchingly heartfelt. Here the stunning clarinet solos that mark this symphony dominate, their clear sound backed up by the layering of the cellos and bassoons.

The final movement is an all-out assault on the ears. Combining the consolidated power of almost 100 musicians to bring us all home. Racing along at breakneck speeds the strings keep stretching for higher and higher notes. Screaming like sirens, horns trumpet, drums smash with warlike rage, it’s one of the most drawn out conclusions I have ever had the pleasure to enjoy. We are broken, nerves trembling, and deeply impressed. This symphony is proof of how music can be both patriotic on the surface but comprised of deeper and more complex criticism under their skin.

But this is not all, a perfectly picked encore Hymn by Ukrainian composer Valentin Silvestrov is light, sweet, and hopeful. A clever way to tie the worlds of these three very different composers sharing one thing, a complex relationship with their birthplace. Whether it be Alexander, Stalin, Krhrushchev, or Putin, music has been a political battleground of the ears and therefore mind. Ending with Silvestrov’s beautiful prayer of a piece grounds the evening, celebrating arts ability to outlast, withstand, or downright rebel against the forces of tyranny and ideology. Long may that continue!

The Barbican have a host of classical wonders, all ready to be explored!