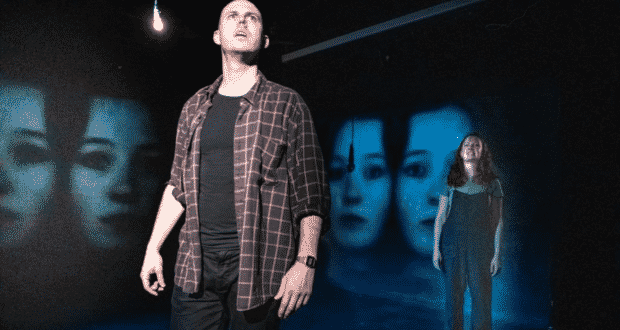 A gripping, emotional reflection on the theatre industry, with clever scripting and technically impressive staging

Inside London’s ‘oldest’ pub, a surprisingly large blackbox theatre rumbles with ominous music and flickering projected shadows. An evening of emotional turmoil and professional questioning is in store, as long as you’re fine with the smell of feet (maybe it’s the 606 years of history?)

Matthew Gouldesbrough’s play follows two actors as they battle with the cruel reality of the industry and a deteriorating relationship. The script is wordy, dense and clever. Throwing a lot of astrophysical metaphors into the mix, the focus on the tortured lives of actors is gripping, if slightly esoteric. With flavours of Beckett, a nice use of unreliable narrators and split views on shared events, you’re never sure what is going on (a positive and negative point).

This two-hander is a technically slick and impressive piece, utilising the black walls effectively for projection of some lovely video. The lighting states change to create the sun streaming through Brixton tube station (an important plot point), and a swinging lightbulb creates threatening shadows. Considering the limited rig and space, we are constantly visually engaged. The whole piece is cued to perfection, allowing the pace to race along at an intimidating speed. In such a domestic drama about dreams shared and shattered, watching black and white videos of the (real-life) couple projected onto the background highlights the issues, bringing a polished quality to the overall piece. A lovely use of half-heard sound and muttered dialogue, along with filming from a physical camera centre stage means the nuts and bolts of this show are precisely where they need to be. To be able to lay all this praise at the feet of one man is a rare pleasure. Along with writing AND directing, all lights, sound and video is done by Gouldesbrough himself. I’m utterly speechless (well, clearly not, as the paragraph above shows).

But we must discuss the thespians on stage, mustn’t we? Gouldesbrough’s script is demanding, fast pace and high stakes, and as such asks a lot of the two performers. Also add in actors playing actors and this brings an extra note to the proceedings. Hannah Morrison rises up and snatches that note, breathing a warmth and veracity into the lines, coping with the fast changes of emotion and the rather intense nature of the piece. She tears-up well at just the right point, and overall this delicate performance is a tour de force for the young actor. Jake Felts, although giving an energetic performance, starts at 100% and therefore has nowhere to go in the ever-building drama, missing some subtler moments in his surge of intensity.

Overall, the writing is bright, and as an alumnus of drama school myself, the piece affected me deeply (although I question whether someone unconnected to the theatre world would be so touched). However, blending in some messy relationship trauma and a touch of the casting couch/#metoo movement allows for a more open-ended interpretation. Throughout, Morrison repeats “how I am progressing?”, and this modern-day mantra stays with me into the warm evening. It is the swan song of a generation of young people trying to find their way in a warming and increasingly hostile world. As the characters spin and flail, we are taken with them on a frantic dance, one which none of us seems to know the steps for.