The Red Side of the Moon 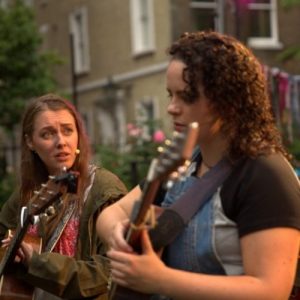 Howling at the moooooon, while under the slowly darkening sky, as a shy satellite peaks out is unique. Blend in some gorgeous vocal harmonies, a journey of self discovery and two talented actors and you my friend have a hit.

Settling among the gently swaying flowers of the Actors Church in Covent Garden, the Iris Theatre summer festival is in full swing, and the setting could not be more stunning. Rag and tassel bunting in pinks and purples match the shades of the roses, as we take our spaces around the traverse stage. Well-placed lights hit a simple set of a bar on one side and a gig stage on another. In the middle is a tree trunk, bucolic?

Flowers and fairy lights, what could be more fitting for a show about fame, fortune and you’ve guessed it folk. But the plot brings in so much more. “Folk is the warmest colour,” this story of thwarted lesbian romance has points of real emotional clout.

Both actors have sublime voices. Elinor Peregrin, playing the superstar Beth, has a rocky tonality, with an imposing ability to convey emotion through song. Kathryn Tindall’s voice is a soft, Laura Marling-like warble, that is supremely beautiful. Considering the music and lyrics are Tindall’s along with musical directing, her sweet voice hides a prestigious and fierce talent. Songs such as ‘Hang the Moon’ are chart-toppers in their own right, an impressive feat for any songwriter, never mind performing them within a theatrical context. Blending and harmonising, these clear voices cut through the central London buzz.

Unfortunately, it’s not all golden sunsets. The points when the performers are not singing are where (some) issues arise. Zoe Woodruff’s script can be a little clumpy at points, not quite matching the magic of the songs. Also, considering the homophobic treatment of the girls by a record label, we only find out later that the piece is set in 2007, not 2021. An important point perhaps considering the strides made in LGBTQIA+ representation within the music industry? This could have been made clearer.

Furthermore, a section where five years have transpired doesn’t quite capture the passing of time very effectively. Again, although this is understandable (in a garden) sometimes Priya Patel Appleby’s blocking can produce some problems with sightlines. Yet Appleby’s ambition at telling such a complex story within such an intimate setting must be commended.

The delight of site-specific theatre really comes into its own as the Church bells cry out at an emotional crescendo, another clever use of unavoidable background noise. The story of starting again and following your dreams is heartwarming if not particularly original and the insight into the music industry is a little two-dimensional but did I mention they sing like songbirds? Tempted by an evening under the stars bathing in the beauty of folk and the hope left in human relationships? Well, take a little trip to the red side of the moon.