The Half Moon Shania 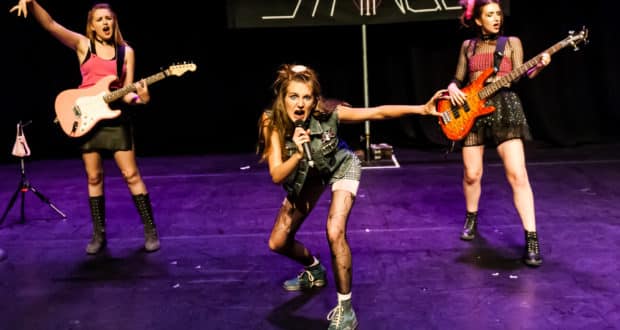 Feminism and fishnets, punk and precarious friendships, The Half Moon Shania shakes the Vaults Festival in this punk/rock opera reverberating with energy and poignancy. The show evokes youthful excitement and naivety within a dark smoky world. The rush and the barely organised chaos are infectious, but there are moments that don’t quite land as effectively as the rest of the show.

THE G STRINGZ are a band of three best friends trying to secure a record deal in the Half Moon pub, in 1999. Through clever lighting (thank you Jake Smart) we feel we are in a grotty pub, though there is a lack of contextualisation within the ’90s punk scene. There is wonderful live music reminiscent of The Distillers, and an aggressive punk message, but it’s perplexing that the band focuses so much on Shania Twain and Britney Spears references, begging the question why set it in the 90s to begin with? Another element that slightly distracts from the music is Cara Baldwin’s writing, which is at times wonderfully lyrical, symbolic and raw, but at other points clumpy and melodramatic. When the writing works, it creates a dreamlike atmosphere that is beguilingly mesmerising. But sometimes the piece seems to snag on its own language.

Now for the fun stuff, the powerhouse of musical and acting talent that is The Half Moon Shania. The desperation and uncertainty of youth are palatable, along with the complexities of teenagers being thrust into a world far too cruel for them. I was zapped back to sneaking into pubs underage, watching angry bands and drinking warm pints with questionable locals. These three multi-talented performers are real stars, playing guitars and drums, singing, acting and operating loop pedals, without pause or hesitation. With a feminist message that shows the injustice of a male-dominated industry which is hungry for fame, sex, drugs, youth and money, there are echoes of Hole’s early years (what Courtney Love should be famous for). The setting is also perfect; the bare walls of The Vaults’ Pit space, the sound of the surrounding festival and the trains rumbling overhead, really draw us deeper and deeper into the kaleidoscopic world.

Thematically the show zings with a topical (if not historically appropriate) commentary and pulls on the heartstrings of anyone who has ever been a teenager Like with Destiny’s Child, The Supremes, and The Runaways, a band is nothing without the personality of its members, and what members we have here! Catherine Davies plays Jil with an absolutely amazing singing voice. The Beyoncé of the three, she holds the band together, leading, and comforting. Cara Baldwin plays ketamine Kerry, the comic backbone of the show, the wild card, and ultimately the most contentious character. Finally, Freya Parks, as Lola, brings home the emotional blows – fragile, broken and eye-wateringly talented. Like so many effective bands, the combination of these three different talents creates a show with a driving force.

The bitter taste (reminiscent of Saturday morning hangovers) stays in our mouths as innocence and friendship are corrupted by the world at large. This emotional punch is by far the most lasting impression of the show. Musicals are sometimes attacked for being frivolous, but The Half Moon Shania is truly heart-breaking, with beautiful writing, thrashing music and knock out performances! We are brought into a little world that so many of us can remember from our youths, bringing back all the concoction of hope, fear, friendship, and betrayal. That’s the shows real gift, and I am not sure if I should thank them or cry.