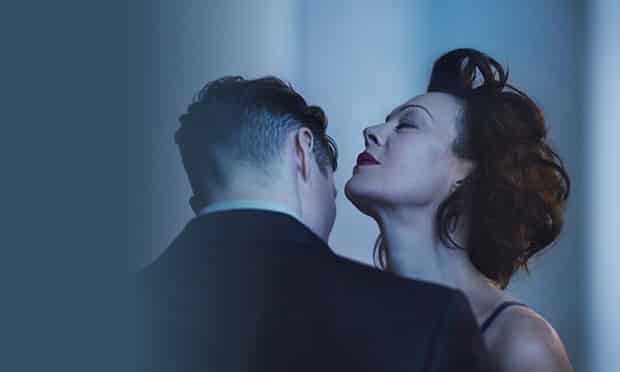 In the blue wash, misery and love dance a highland jig in a small London flat, and we the audience are enraptured.

Tom Schutt’s set is as if some artistically minded giant has cleaved a building block in two, exposing its insides to the air.

Although the transparent walls and full staircase allow for a lovely play of shadows, the lack of use of most of the space other than the main flat is almost over-indulgent.

The stylish reliance on blue light is expected and effective and, paired with Peter Rice’s dreamlike music, allows for the production not to flounder on the rocks of naturalism.

Within this house of ghosts, hearts are broken, fragile friendships are made and almost half a tonne of tobacco is smoked. The piece must have been shocking when it debuted in the 1950s, but it feels perfectly relevant today.

Rattigan’s writing is equal parts believable and dripping in symbolism (my favourite).

Dark humour interwoven with high emotion proves for a heavy but rewarding evening.

Helen McCrory gleams as the lead Hess, who is beset on all sides by at times well-meaning but cruel men, from her ex-husband to Dr Miller (Nick Fletcher) and a preaching upstairs neighbour Mr Welch (Hubert Burton).

Yet the real damage is done by her emotional dancing partner and lover Freddie Page, played with brutality and British bluff by Tom Burke.

This articulate drama examines the complexity of love and the fallout when it turns sour.

Interestingly, for a modern audience, the relationships between the women of the house are what caught my eye.

The friendship between Hess and Mrs Elton the landlady, played by Marion Bailey, is captivating as it shows the way women dealt with the decisive and entitled men of the 1950s – has much changed?

Hess and Freddie’s battle for happiness is one of theatre’s most legendary, less venom-filled than George and Martha in Edward Albee’s Who’s afraid of Virginia Wolf? but equally destructive to both parties.

McCrory is fragile yet firm as a woman making her way in world dominated by interfering men.

The last image of her tear-stricken face as she cooks and eats an egg sandwich resonates with anyone who, after a break-up, revaluates themselves now that their world has crumbled around them.

By the end of the piece, we are but crying blobs of clay in McCory’s capable hands.

In this claustrophobic space, life, love, death, and rebirth are all touched upon, and the experience is cathartic and exhausting for audience and characters alike.

As Hess cries to the walls, she is “caught between the devil and the deep blue sea”. And in truth, haven’t we all been, at one time or another?