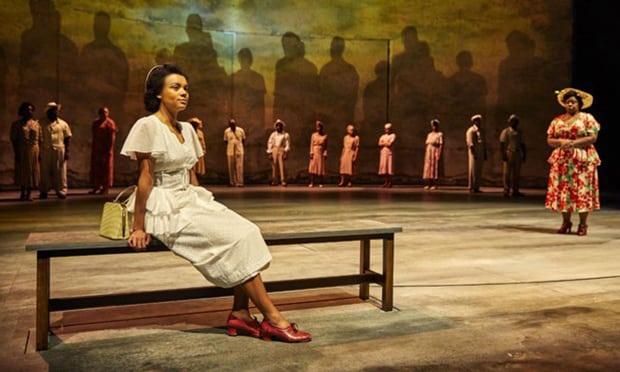 But how does it fare when compared to the book or the popular 2009 BBC miniseries?

Edmundson takes a slightly different narrative route to the series, but lands on all the plot points with grace and subtle charm. Built on strong bedrock, the material is always ripe for creative juices to flow.

The interesting thing about this story is not the dreams of the characters but the hard realities they are faced with when they attain them.

The performance of Aisling Loftus as Queeny stands up very well in comparison to Ruth Wilson’s TV depiction. She is her own character, filled with bravery and northern fire, liberal and powerful in love.

Leah Harvey playing Hortense is equally firm in her distinct, brisk flavour, and entertains with her imperiousness.

The men are impressive too. Andrew Rothney’s Bernard is all stiff British hatred, broken by witnessing the evils of empire and a world at war.

CJ Beckford as Michael is a swoon-inducer, all warmth and serenity.

Gershwyn Eustache Jnr as Gilbert is the one with the most authority – just a good man trying to make his way in an unjust world, his monologue spitfires truth into the air.

The blossoming of Gilbert and Hortense’s romance, and a moment over sharing some chips, is the reason this tale has lodged itself so deep into the heart of those who witness it.

Rufus Norris, directing, builds these moments with real care, sculpting the performances and style into an infinitely complex and appropriately epic tale of humanity on the move.

Set-wise, it is all rather minimal and projection-heavy. Vanishing trap doors to bring things on and off stage are used with humour, as people suddenly rise or fall.

Katrina Lindsay’s symbolic use of projection to foreshadow difficult elements really sings, and the whole piece has dramatic space that the TV series was unable to create.

The skeletal bones of the house work perfectly behind the large projection screen and allow for a nice flexibility of movement.

This underlines a real difference between stage and screen. In the mood for heavy realism? Flick on the box. But if you want an emotional sitting room scene with billowing black clouds two storeys high raging past, well, you get yourself down to The National, or in this case, turn on Youtube – the analogy doesn’t quite work in lockdown but you get the idea!

Exposing the cruelty of racism in 30s, 40s and 50s Britain, this story has never felt more relevant.

The issues unpacked include the ship the Empire Windrush, immigration, national identity and the role of women.

The wounds of racism that have been left to fester within this country are shown for what they are in this play: unhealed.

But the focus on personal love and kindness in the face of bigotry is what saves this piece from being a tragedy and allows for an overflowing sense of hope as the storm clouds circle.