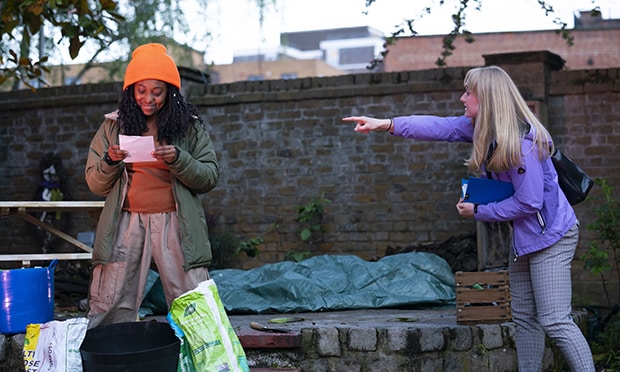 Set in the well-kept and secluded Hoxton Community Trust Garden, Persephone is a two-hander, one-act play. It charts the rippling effect of Professor Charlotte Hawthorne and the obsession and hatred she creates in the two characters, Masha (Laoise Sweeney) and the Gardener (Yolanda Ovide).

As with many fringe plays, there is an issue of over-ambition. The physical over-ambition of outdoor theatre in May is obvious but understandable considering the current restrictions (and mitigated by some very large umbrellas). The thematic over-ambition is a little more complex.

Gianna Kiehl’s writing and directing is a touch clumsy, trying to fit too many high-stakes issues into the short timeframe and therefore asking too much of her talented actors. Considering the play follows the first meeting of the two protagonists, it is implausible that they would speak so openly in front of each other.

There are breakdowns, twists, reveals, spiritual rituals, ghosts and family secrets. Although I understand that thrilling a jaded modern audience (especially in the rain) is hard, it should never be at the price of believability.

Nevertheless, some things make the performance uniquely interesting. Site-specific theatre depends on the play’s suitability for its surroundings. When this works it can be golden. With all the National’s money and revolving stages, you couldn’t create the effect of real wind playing with Sweeney’s hair in the middle of a monologue, or the soft patter of rain dampening the actors’ faces.

The garden is beautiful to behold, with battery-powered stage lights and trees dancing in the wind – it’s as if we really are on the grounds of Hawthorne’s estate.

Performance-wise, both Sweeney and Ovide do their best with the script. Sweeney projects nicely, her voice rebounding off the high sides of the bordering estate. Ovide is quieter but always heard and felt. They are both engaging and spirited performers.

We theatre survivalists huddle together like Emperor penguins for warmth, and are thus rewarded for our pluck. As with anything outdoors, it is the luck of the draw. If it was a glorious spring day, the experience would be very different. However, the magic of site-specific theatre is that no two performances are ever the same, and here the sprinkling rain and whipping wind fit with the turmoil of the characters’ lives and journeys.

Despite the rather extreme emotions on display, the setting restores some of the lost veracity and makes for a visually stunning experience. Ending on a rather implausible but still heartwarming note, the characters find solace in one another. The last line feels wreathed in irony in the wet and cold air – “Happy summer”. Well, happy summer indeed.