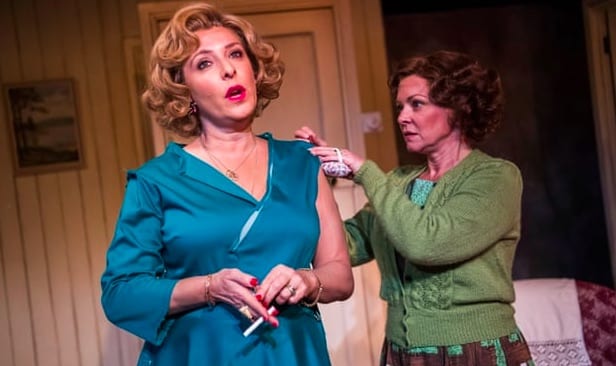 Doilies and deception, surveillance in the 60’s, and more cups of tea than the Great British Bake Off. Pack of Lies is a moving play based on a true story, focusing on the way political turmoil and distrust can poison a seemingly perfect suburban friendship.

Deep within the tunnels of the Menier Chocolate Factory, we suddenly emerged into a full downstairs replica of a modest home, complete with lace, a car, and more floral patterns than is good for anyone. The world is perfectly created for us in this heart-wrenching tale set in the middle-class heartland of North London. This slow-burning show works surprisingly well in its concrete environment, and even the incredibly wide stage is more of an assent than one would think. Although it is rather glacial at the get-go (though not unenjoyable), the pace is quickly made up with a strong second act. Like most remarkable stories set in unremarkable places, the groundwork for the latter can seem… well just that. In this case, fleshing out the rather drab but content post-war world of Ruislip precludes the intrigue that follows.

This story is so very realistic that the main couple reminds me of my grandparents, down to every article of their relationship – even the colour of their sofas. Set in the Cold War, this tale is like if Beatrix Potter wrote the script to the famous German film The Lives of Others: polite, sweet, and tainted with a brush of sadness and cynicism.  The acidic breakdown of a friendship of five years, as well as the trust of neighbours who have shared a life, is like a car crash in slow motion. Thematically, this story asks of you what you think is right. Are you a good person? And do you stay a good person, even when you do bad things?

Acting-wise, there are many stupendous performances, the cast treading the line between naturalism and dullness with skill. The characters unfold before us beautifully, juxtaposing the idea of a safe Middle England and the extreme pain and danger that lurks everywhere in the human condition. This is especially hard-hitting. The two performances that shine in this set of twinkling stars are Finty Williams playing the conflicted and painfully truthful Barbra Williams, and Tracy-Ann Oberman playing her total opposite and best friend – the loud Canadian, Helen. Like a likable Martha from Who’s Afraid of Virginia Wolf – complete with drinking problems and dark painful secrets – Oberman’s Helen is a joy to behold.

Interestingly for Williams, she is starring in the role her mother and father (Dame Judi Dench and Michael Williams) brought to life in the original play in 1983. This cyclical element was a lovely added touch, and Williams should feel very proud to do such justice to the character played by her mother. Playing the matriarchs of each household, and forging real emotional connection within the play, the strength of their performances are the pillars that keep this production’s head held high. The writing by Hugh Whitmore is as clever as it is subtle and this piece zips with half-heard meaning and unseen clout. With an increase in global tensions between Russia and the US, this story of a simple friendship ripped apart by lies has special relevance. So, hold onto your cuppa, and don’t spill the milk. There is trouble in paradise after all.