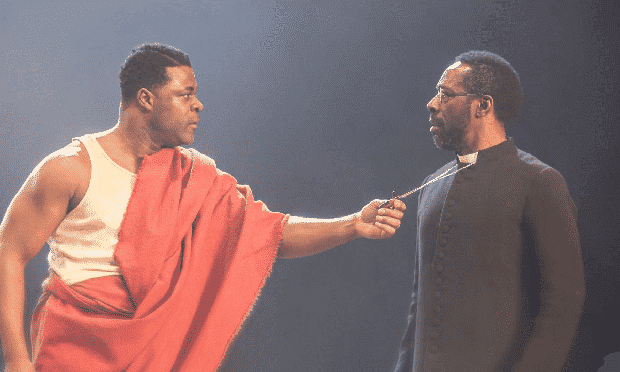 Lorraine Hansberry’s final work, Les Blancs, invades our living rooms, driving out the sound of my washing machine and whinging puppy. It is a work that demands to be seen.

Written in 1970 and finished off by Hansberry’s husband, this epic drama hasn’t had its time in the sun when it comes to accolades.

Hansberry’s writing is both brutal and beautiful – “crumbs from the banquet table of Imperialism” is just one example.

Managing to be everything at once, the piece sees an African country in turmoil in the late 19th and early 20th century.

Revolution, empire, and identity are questioned, and the focus on individuals adrift in the chaos created by European imperialism makes for a heavy-going but important piece.

Yaël Farber’s directing allows for the depth and breadth of the tale to be felt, his attention to the families on either side of the race divide giving a personal touch.

The brooding aesthetic builds tension throughout. Soutra Gilmour’s skeletal hospital dominates the set, spinning as we would expect it to with the National.

The chalk-like dust that covers and imprints itself on the clothes and bodies of the characters sets the location admirably. The sense of heat and hardship is felt keenly.

Adam Cork’s choice of traditional tribal singing and music grounds us within the continent and again gives rise to the bubbling tension at the heart of the piece.

Danny Sapani playing Tshembe Matoseh draws attention with burning energy so powerful he sometimes trips over his lines in the frenzy – a performance overflowing with life, as the returning son torn in two by the prejudices of the world.

Elliot Cowan as Charlie Morris, the American journalist visiting the outpost to write a story, but baffled by the complexity of Africa under white rule, again grapples with his own contradictions. He provides a nice example of a naïve white liberal American.

James Fleet as Dr Willy Dekoven rumbles as a drunken, bitter, broken man, disillusioned by the processes of their “mission” – this is such a nice departure from the bumbling fool Fleet normally does so well.

Lastly, Tunji Kasim playing the conflicted Eric (half-brother of Tshembe), mixed-race and caught between the two worlds at war.

Madame Neilsen, played by Siân Phillips, is another character caught between wanting to help the native population while limited by her upbringing and views.

The whole cast understands what is at stake, and provide a vista so utterly believable that you can feel the sun burning your skin and the rustling of the leaves of the jungle. You are there, which is a remarkable thing to be able to transmit through a screen.

Highlighting the ugliness of colonialism to a British audience is so important, not just in a general historical sense but in a personal one, showing the lives and families that are mangled by the whirling blades and cogs of the machine of racism.

With violence, rape, murder, and unimaginable cruelty, the myth of empire is sustained and, like the troubling production of The Secret River, the National continues to put out work that challenges its audiences.

I hope that with this understanding of our shared history and rightful shame, we can move to a better future.