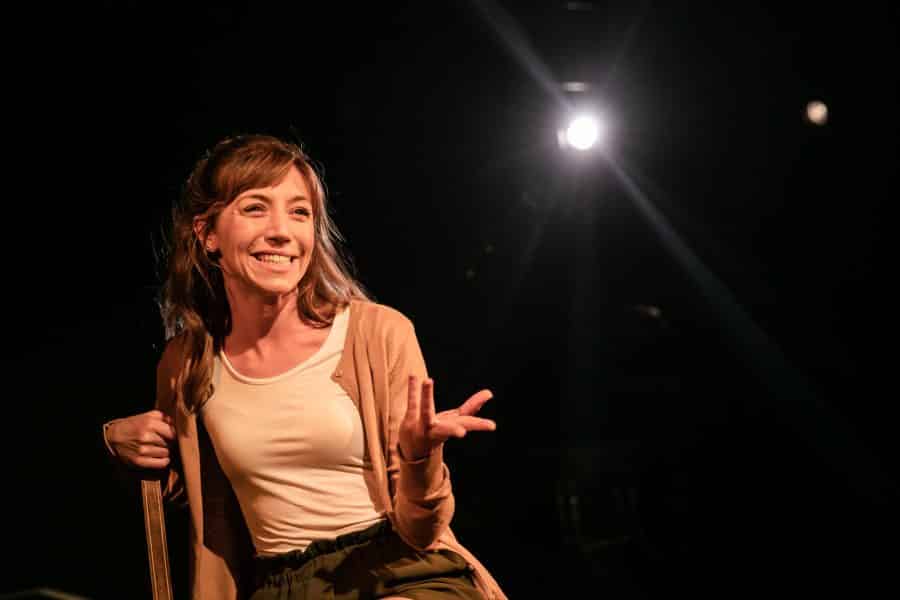 A life dreamed of, yet built using sand that can be easily crumbled into the sea. With Fabric, we have an insight into a story far too familiar and a fate far too common. The issues discussed are ever-present, but what I am most interested in is does a gripping subject matter make a good play? Do good intentions create effective drama?

The answer in relation to Fabric is…maybe. The open and detailed discussion of sexual assault and the pressure society puts on women is obviously important. But there is more to theatre than just a good plot, and that is where the holes start forming in the…well…fabric of this piece. The writing is chunky, and although at times effective, it is overly symbolic and rather obvious. Yes, this play creates a world you believe in, but there are many one-handers out there touching on the same issues in a much more effective manner. There are also minor problems with the SM speaking lines in full light and the truly unimagined use of the rather large space in the upstairs of the Soho Theatre which doesn’t help the show. You can see the big twist coming, and the contortions of the script to hide it from the audience are just as transparent. The show feels far too long. Although what we see is interesting and has moments of poignancy, it moves at a sluggish pace and the inconsistent skill of writer Abi Zakarian, makes for slightly uncomfortable viewing. We ricochet between moments that really sing and sections that are a hop-skip-and-a-jump away from dull. Thus explaining why I answered ‘maybe’ earlier.

Nevertheless, like lovers, inconstancy is much better than mediocrity! The moments that do work shine with a use of imagery and thematic skill that is fitting to the piece. We also have the character of Leah brilliantly executed by Nancy Sullivan. Confident and enjoyable to watch, she is the saving grace of the production, both skilled with comedic timing and able to puncture the emotional resonance effectively with a strong understanding of the character. The rape scene is heart-breaking and painfully well-acted by Sullivan, and although it takes a long time to build up to this crescendo, it is a moment that punches you right in the chest. The pain and humiliation are felt by all, and we the audience are made guilty by the act. This is a very effective moment and should be commended for both writing and acting ability. The aftermath and crumbling of Leah’s perfect life is by far the most interesting section of the show and could be reached quicker and spent more time on. The subject matter, shown by Sullivan’s skill and Zakarian’s fluctuating writing, is nevertheless insightful and moving. Linking the production to the charity Solace is a wonderful way to make sure theatre grounds itself in the real world and strives to help a real cause with real people.

Deconstructing this damaging myth of the perfect girl/wife/daughter/human and the danger that lies at the bottom of that rotten pile is fundamentally needed! Plays like this shout it openly. We need more productions that talk loudly from the female perspective and Fabric does that, it just isn’t the best within the genre and for people who don’t like one-handers, this is everything you will be wary of. I want to love this play for its cultural significance, the feminist themes, the brave portrayal of sexual violence, and I do like it, but it is missing some crucial elements. Sometimes it’s not what you say, but how you say it that makes all the difference.

Fabric is playing at The Soho Theatre