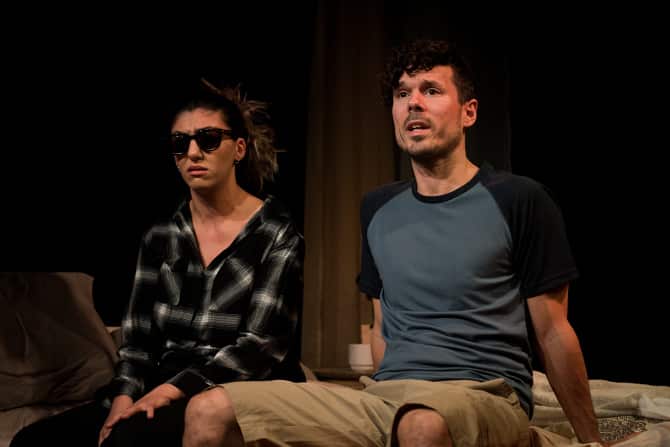 We have all had our own holidays from hell, the pressure to enjoy oneself, the sights, the sounds, the partner you never realised you disliked until it’s just you two and a totally alien culture. Cuzco explores this issue, and then some, crafting a fascinating look at the colonial legacy. This production that has translated the text from the original Spanish, burns with honesty as its simple actualisation scorches like the bright Peruvian sun shining above as it fries your heart to a crisp.

As someone who trotted around Peru doing the very same traveller cliches as our lead couple, I may be slightly biased, but not completely. For a show so stuffed with potential and resonance, there are moments that aren’t as effective. The writing though heavily symbolic and rather surreal, sometimes borders on the over-sentimental, unrealistic and frankly, slightly emo. This is most clear when Gareth Jones (playing HE) takes on a monologue. Although Jones gives a good performance, the translated text has the classic Iberian imaginary and flare and this isn’t quite pulled off by Jones’ attempt. Although it is clever to set the play in various hotel rooms, using lighting to create mood, the gazing into, what we assume are plain walls gets a little grating at times. Again symbolic, dramatic, meaning-laden, yet like the writing at times, pushing it a little too far.

The real legacy of Cuzco is providing a modern Spanish view of a formally colonised country – the shared language, layers of historic guilt and economic disparity – which really brings a new and more complex dimension to the travellers in the third world narrative. Speaking of complex dimensions, enter Dilek Rose (playing SHE) riding the surreal language like a quiet ripple; she is broken, depressed, multifaceted and clever (all my favourite things in a female character) as she plays a lost woman struggling at the end of her relationship in a land she finds both strange and frightening (a little Wide Sargasso Sea). This is a knockout performance and really delivers some punch in a fluctuating show.

In “the navel of the world” Peru’s ancient city, we watch a relationship strain and collapse, but to reduce the play simply to that would be an injustice. In classic Spanish fashion, it speaks on life, love history and longing, lust, and everything under the sun, proving to the London theatre scene the importance of translating plays. Both Victor Sanchez Rodriguez (the writer) and William Gregory (the translator) should be thanked for this bitey, mouthy gem of a show. Less pisco sours and more April showers, this show explores the blurry line between love and hate, life and death, joy and pain, in a land far away from home. After all “it’s on the periphery when we know the centre”.