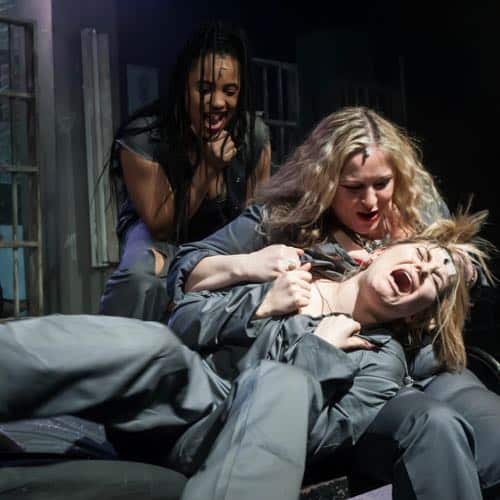 Caught between Orange is the New Black and Chicago with neither the skill or charm of either, we are welcomed into the world of fictional HMP Larkhall and the musical version of the 1999-2001 TV series Bad Girls.

Following the lives of the women incarcerated and the abuses of power, the scene is set for high drama. Now prison and musicals have had a long and productive history, but how will a production fare that claims to be both hard-hitting and also comic?

The short answer is very badly, the long answer is as follows. A good musical manages to make a point about the world we live, and have moments of comic relief (The Thénardiers in Les Misérables). Tackling heavy subject matter requires skill, tenderness and impressive writing ability.

Unfortunately, Bad Girls has none of this. With little emotional maturity, there is an innuendo-filled song just before a pretty brutal rape and suicide scene.

There is a vague message of anti-abuse of power in one story, then another plotline that seems completely fine with such taboos. The same double standard follows when it comes to sexual abuse. This is infused with a sense of campness and caricature that debases the whole experience of prisoners and guards alike.

This musical creates cheap laughs at the expense of these women while simultaneously trying to “tell their stories”. By adding music into an already melodramatic script the whole production becomes at best a comic farce and at worse a tasteless mess.

Of course, most of the blame can be put on the original writers of the musical and whoever thought that this show was appropriate for a modern audience. But the problems don’t just end there. Although some of the cast tries very hard within the restraints of the show, there are some members who struggle with their lines and the demands of the score.

Within the show, there are some undeniably talented performers. The moving love affair between Rebecca Eastham’s murderous Nikki Wade and Bella Bowen’s Helen Stewart is well-acted and effectively sung.

The saving grace of the production is Hayley-Jo Whitney, playing the mobster’s wife Yvonne Atkins. Her style of comic, but truthful delivery is how the whole musical should have been played. The ensemble work is effective and the cast deals with technical issues very well.

The main problem is that this musical is out of touch with the current climate. The flitting between comedy and unsettling brutality leaves us confused and amused. Not every TV show needs its own musical, and not every musical need to have a revival, can we all, please agree to put Bad Girls to bed permanently?