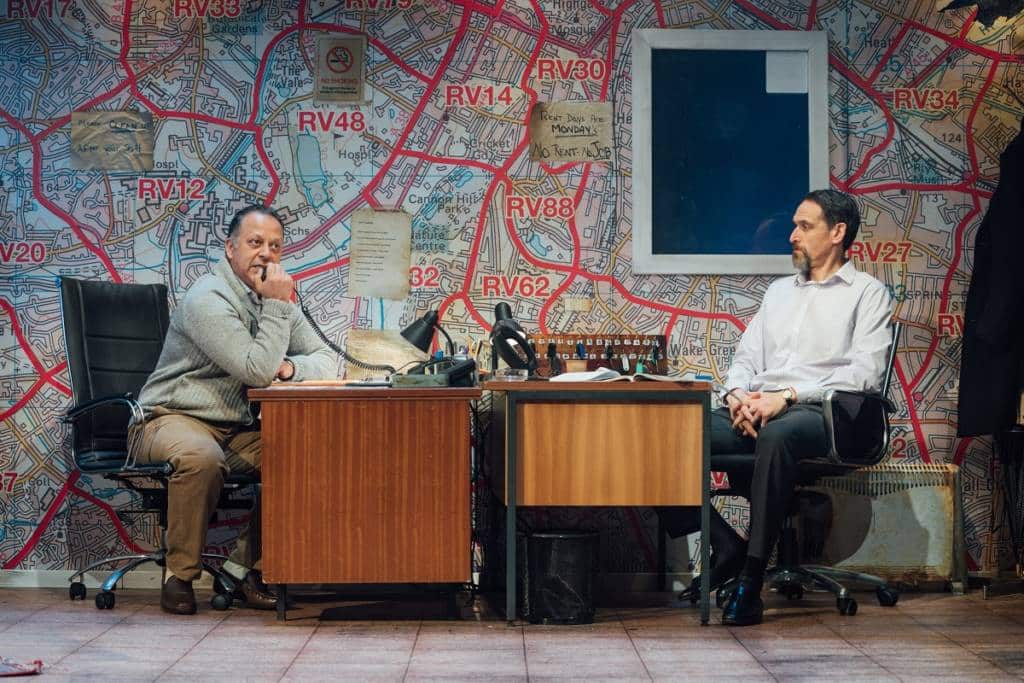 Plunging into the detailed microcosm of a taxi firm in Middlesbrough as Margaret Thatcher dies; we are reminded of the Iron Lady’s far-reaching arm into the personal and economic relationships of a generation. Although Ishy Din’s six-hander has scope, it is rather lacking in finesse.

While thematically its use of the personal vs. political debate is fascinating, the play’s overarching end/moral loomed large from Act One. Feeling rather inevitable and therefore lacking punch, the plot stretched ahead of us. The set and lighting, although reasonably naturalistic, lacks any of the added symbolism that is so delicious in theatre (there is an attempt to use lighting creatively but this, unfortunately, becomes a one-trick pony as it is left by the wayside). The first act drags and although impressive acting from all, the cramped nature of the set/script rather limits the range of the play.

We are invited into the ordinary yet extraordinary lives of the characters buffeted this way and that by the cruel winds of capitalism, turning friend to foe, and foe to foe and friends to……You get the idea. Approaching Empty is a slow burner focusing on how Thatcher’s reign affected the north, and specifically the South Asian community working in the steelworks (until they were closed). The meat of the play is wonderful, the cutthroat world of business (almost literally…), the generation gap, the idea of honour in a man’s world and the safety of the community, all under the changing landscape of Britain from 1980-2000s. What a main course, but the problem is the sauce, the added flavour, the amuse-bouche; there is something missing in this piece that has everything lined up to be a knock-out success.

The performances, on the other hand, are strong, especially in the second act that hums with energy missing in the first, particularly the clashing best friends who exemplify the change in Britain’s moral and financial geography. Kammy Darweish’s (playing Mansha) nativity, vulnerability, and kind old-world-heart, breaks everyone else’s in the audience. On the flip side, Nicholas Khan (playing Raff) is the cruel new face of Britain, a modern businessman with the heart of a wolf. The wrangling between the two is a joy to behold. A special mention also has to be Rina Fatania (playing Sameea), a much needed female presence, both terrifying and tender in a part that could have easily been overdone or under looked. The performances are not at fault here and provide the fire that sometimes dwindles in the script.

This play is a valiant attempt at a complex critique on capitalism, Thatcherism and the changing nature of Britain. Although the setting is refreshing, the play struggles under a script that lacks the twist and turns of more cohesive plays. Yet for a world premiere, this play has the feel of a northern version of Arthur Miller’s All My Sons (which is more than impressive). There are lovely moments in Approaching Empty, but this production doesn’t quite hit the emotional mark, scraping the bull’s eye very closely but just missing the centre.

Approaching Empty is playing at the Kiln Theatre until 2 February