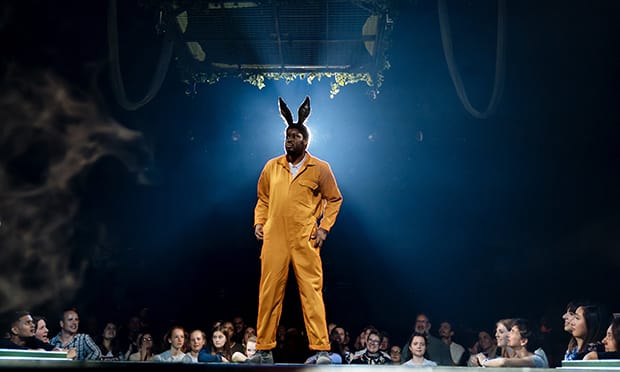 ‘Flashy and spirited, but adds no depth to Shakespeare’s famously raucous comedy A Midsummer Night’s Dream can produce peals of laughter or full-body groans of despair.

Steeped in myth and set in antiquity, it is fitting that Game of Thrones star Gwendoline Christie should join the cast as queen of the Amazons, Hippolyta, and queen of the fairies, Titania. Double queening – impressive!

The story is a rural romp through a bewitched wood. It’s a four-part harmony, with four lovers switching their affections (with the help of some fairy mischief) faster than you can drunk text your ex.

An angry fairy queen tricking her husband into falling in love with a man turned into a donkey because she won’t give him his bastard child to turn into a magical fairy soldier.

The antagonist is swapped to Titania in this version – also, WHAT? – and a troupe of useless actors try to impress the royal court, taking a detour through said wood for the wedding of one of the four original loves mentioned above. Following?

In amongst all this is a smattering of gender-bending, a surprising amount of bestiality, and many, many drops of magical botanical date rape. And it’s a comedy? If whimsy is not your cup of hemlock, then I would avoid this masterpiece.

Considering its popularity and its magical nature, the play is ripe for directors and actors to allow their imaginations to run away with them.

The problem with a runaway imagination is sometimes it doesn’t know when to stop. This is the snag that the Bridge Theatre production hits in a big way.

Bunny Christie’s set is an intriguing concept. We have green blocks rising out of a sea of standing audience members, all with blue flower headdresses on – the bravery in standing through a Shakespeare play must be commended no matter what.

Beds dominate the stage and float as the dreams of the rather too regularly slumbering characters soar above us. So far so good. Then we start to lose the connection.

A troupe of disappointingly dressed fairies – think Coachella more than Lórien – spin and twist on silks overhead. Impressive but unhelpful to the action.

Nicholas Hytner’s directing feels at times like throwing everything at the wall and hoping something sticks. For example, giant parachutes being pulled over the standing audience members, zorbing balls being thrown at the end, and cringe-worthy dancing to Beyoncé. Not in themselves bad, but the ever-present ‘Why?’ is always around the corner. This, after all, is revelry with a capital R.

Amidst the rather tiring chaos, there are moments of real comedic genius, mainly in the form of David Moorst playing Puck and Hammed Animashaun as Longbottom, who is then enchanted into a donkey. These two carry the action and unintentionally cast a shadow on the scenes from which they are absent.

Moorst’s Puck is a northern demon and the only one who seems to have thought about how a fairy creature might move differently from, say, a ballet dancer or a gymnast. His use of silks during his long soliloquies makes sense, as it livens up the parts that can drag.

Let’s not forget the one-man stand-up machine that is Animashaun, turning a character that is a cruel joke into something far more interesting. His mannerisms as the donkey and his “acting” ability in the play-within-a-play scene brings the audience to tears. Also, he features in a “death” scene that is by far the best I have seen in my many years watching Shakespeare.

Oliver Chris as Oberon and Gwendoline Christie as his fairy bride are energetic and adequate in their roles, and although the directorial choice of giving the power to Titania is refreshing, their performances aren’t outstanding.

In a fight/love scene over the rising and falling bunk beds, Puck’s liberality with a love flower produces a delectably queer view of the story, and also shows each actor’s range with comedy and tragedy in quick succession.

Despite some high-spirited and hilarious performances, the production tries too much. It is flashy and covered in glitter but fails to add anything new to the vast depth of the tale.

Apart from learning that you should never fall asleep in an enchanted forest, the problem with the piece seems to be a case of not being able to see the wood for the trees.